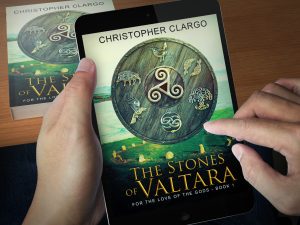 A vengeful god returns from the shadows and will not rest until his dark designs are fulfilled. His name is Velak, and he comes to harvest the Chosen.

In the sleepy village of Nabaya, Tarek lives a blissful life with his wife and son. He spends his evenings in the tavern, entertaining the villagers with stories from Tarania, the land where they live. Then one night, he recites a dark fairytale from his homeland’s distant past:

A creature as old as the ancient Hen Rai,
Its home is the forest, in slumber it lies.
It waits for a movement, a scent or a sound,
Then out of the forest, the Bwgan crawls out.

As silent as a tomb, it nears its prey,
All tucked up in bed, sleeping they lay.
Then out of the shadows, it stretches its limbs,
Slithering and shimmering on the ground they skim.

It worms through windows, chimneys and doors,
Slipping past those it knows to ignore.
Until a child it finds, that brings it delight,
And steals them away, in the black of the night.

The villagers applaud, oblivious that Tarek’s words foretell of the cataclysmic fate that awaits them—for the terror that inspired the legend now lurks outside the village walls, ready to be unleashed by its divine master, Velak. In the aftermath, Kaine, the ruthless commander of Velak’s fanatical worshippers, reveals to a heartbroken Tarek the staggering truth of why the village was attacked. They came for the Chosen, and they came for Tarek. The dark god has plans for him.

What happens in Nabaya will set in motion kingdom-shattering events that lead to one place—the Stones of Valtara. It’s not a question of who will die, it’s who will survive to challenge Velak?

Fans of Joe Abercrombie, Mark Lawrence and Bernard Cornwell will enjoy the Celtic-themed world of Tarania, with its flawed characters, bloody battles and jaw-dropping twists.

What readers are saying about The Stones of Valtara

She wrote…
OMG
SO IT BEGINS : Lady Amira opening paragraph.
OMG??? What a read!
Taranians, Mendari and Ancient Firsts
Epic lives playing out before my eyes
Exquisite Early Medieval world building
… All for the glory of a warriors death
… AND SO MUCH MORE !!!!
This book dragged me gasping into its world and the people who live there and kept me sitting on the edge of my seat right to the very end.
Bring on book 2 … I can’t wait to go back !

He wrote…
Gripping and full of action
This is the start of a great series, full of twists and turns that will keep you wanting more.
My favourite character started off the worst of the bunch and it only got better.
Definitely one to reread!!!
Booksprout Advance Review Reader, Stephen, gave The Stones of Valtara

He wrote…
A stunning first novel from Christopher Clargo. The Stones Of Valtara will take you to an imagined world and time full of believable characters caught up in a war of might and magical foreboding. A guaranteed page-turner of descriptive brilliance that leaves you wanting more.

Fear, Loathing, Death , and Treachery in a Savage Land
ADULT Medieval Style Violent Sci-fi Fantasy with Paranormal Elements. This is a twisted tale of Religious fanaticism and untold Treacheries between families.
I don’t know how anyone in this novel ever survived to adulthood. But somehow they did even though their entire world is filled with mass executions, and murderous sword and crossbow ambushes and battles between warring religious factions all the time. The two factions are the followers of the Goddess Enora, and those that follow Velak.
None of these people are happy with their lot, and it’s because there are two religious factions that cannot leave each other alone or coexist. There is also a highly regimented caste system wherein the mark of their caste is literally branded into each person’s palm . Pretty tough to hide that!
Each side insists on killing armies of both men and women knights and warriors, even women and children civilians in their quest to dominate, and eliminate their enemy.
The violence is overwhelming and salacious at times. Violence is used for the sake of instilling fear and total obedience among the peasant populace, as well as turn their enemies to their side. Non compliance means a nasty death . Both sides are guilty of atrocities . A Shoot first and ask questions later attitude seems to be the norm.
Kaine , the heavy in this tale, is the leading disciple of the supposed God, Velak , and his leading enforcer . Velak is a God always hungry for blood and gore, or at least, this is the way Kaine portrays him. Kaine slaughters hundreds just to make a point, just to ensure obedience by the masses. I guess there are still a few left alive for him to conquer and subjugate!
In the meantime, there are persons who are sleeper spies among both sides. is there still an honest man among them? Is it Cai, a young warrior who cannot remember his past? Or is it Tomos, the young heir to his father’s throne who is so sickly he can never become a warrior?
ARC Provided by Booksprout
I also got this ebook from Amazon with KU.
Great world building and editing is throughout this long but mesmerizing novel. The jumping around with different chapters from character to character in the novel was a little disconcerting but it all fit seamlessly into the timeline of the book.

“The stones of Valtara” is the first book in a new fantasy series by author Christopher Clargo. For those, like me, who are fans of epic fantasy with touches of alternative History and a consistent setting based in Celtic roots and Early Middle Ages, this author’s debut is a must, and promises a series almost as enthralling as “Chronicles of Ice and Fire”. Of course, no dragons here, but a dark second world – Tarania – where political intrigues go hand in hand with the struggle between two religious systems. The fights for power and religious fanaticism lead the trajectories of several characters, which can be good, bad or even doubtful; especially the women, they can be surprisingly strong and decided in their actions, a refreshing view in fantasy epics, where so often a certain sexism seems to be the keynote. In all, it is worth of the reading, but I leave you a warning: it’s not for the faint of heart. There are a lot of violence in many scenes, so, be prepared.